Sony has at last made its intentions clear about how many of their smart phones will get official updates for which the fans of Sony were waiting desperately.In this press release they have pretty much clear the confusions about which mobile sets Sony will roll out updates in the coming days and for which mobile phones about which Sony has decided not to provide any latest android updates.

On friday Sony announced about which of its mobile phones will be updated to android 4.1 and looks like jelly bean updates will be available for most of sony’s recent smart phones.

As Sony gave the statement

Sony’s Xperia T, Xperia TX, and Xperia V will all be upgraded to Android 4.1. Sony says the phones will receive their upgrades from mid-Q1 2013

One of the very famous tablet from Sony which is  Xperia Tablet S will also be upgraded to android 4.1 but unfortunately Sony didn’t estimated the date when they are going to roll out jelly bean update.Xperia S, Xperia Acro S, Xperia Ion, Xperia P, Xperia Go and Xperia J is also in the list of those smart phones which are in the line of getting android jelly bean 4.1 updates. Sony didn’t mention any release dates… it seems that these handsets will be getting jelly bean update in Q2 of next year, which will be a late release but we hope for an earlier release.

The thing is which is even more disappointing that Sony has included 2011 Xperia phones in that list which will not get updates of Android jelly bean.As Sony said in blog

“We were glad to provide the Android 4.0.4 upgrade for our 2011 Xperia portfolio across most markets and the majority of models but, after thorough evaluation, we have concluded they will not be upgraded beyond Ice Cream Sandwich,” Sony said. “Beyond Ice Cream Sandwich we would not able to guarantee owners of these smartphones the user experience you expect and we demand.”

If you look at the list of 2011 Xperia phones you will see really famous big names that for a moment you start to think how Sony can do this whew frankly speaking it is really really disappointing for me.Those big names are Xperia Arc, Xperia Arc S, Xperia Play, Xperia Neo, Xperia Neo V, Xperia Mini, Xperia Mini Pro, Xperia Pro, Xperia Active, Xperia Ray, or Sony Ericsson Live or Walkman. 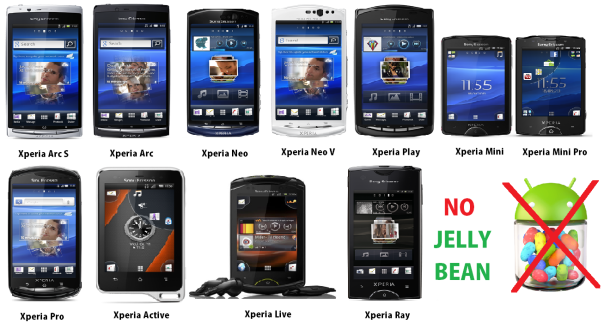 I think that it android jelly bean update really matters as it provides so many outstanding features like offline voice typing, auto arranging of icons and predictive keyboard so Sony should also think about the 2011 Xperia phones owner as well.

As you all know Seven Color Gossip is our blog name owned by three mechanical engineers Sikandar Hayat Khan,Faizyab Khan and Hamza Aslam whose each and every word contains sense in it.From seven color we want to convey our message that you will find all the latest interesting topics which can be from any field and from gossips we mean that in seven color gossips you will even find your most hated topics most likely as we will make them easy for you to understand.
View all posts by sevencolourgossips »